Any time we make a change like this, the goal is to make the system work better and, ultimately, improve ridership. More on that in a bit. We also look at other measures like on-time performance – in other words, the bus is there when we say it’s going to be there.

So how did we do? Here’s a look at the on-time performance of every route before last year’s service change. The routes that were about to be changed are highlighted in yellow: 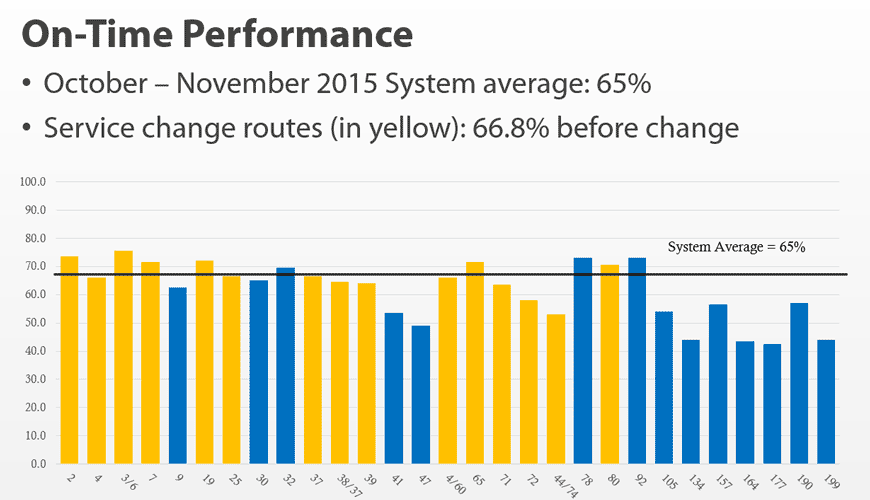 In the fall of 2015, our entire system had an on-time performance of about 65 percent. If you count only the service change routes, that number was just under 67 percent in 2015. That’s just not as high as we want it to be.

Here’s a look at those yellow routes again, this time in the fall of 2016 – shortly after the service change took effect:

Almost every route saw an improvement in on-time performance after last September. Taken as a group, the on-time performance jumped to 76.1 percent – a significant increase from the previous year. Among the biggest improvements were Route 72 in Orchards, and Route 74, which replaced part of the old Route 44 on East Fourth Plain Boulevard. Route 4 also became more reliable, no longer having to cross the Interstate Bridge and fight freeway traffic. Remember, this was before The Vine launched in January.

And the routes that didn’t change? Not surprisingly, they didn’t get much better. Several got worse: 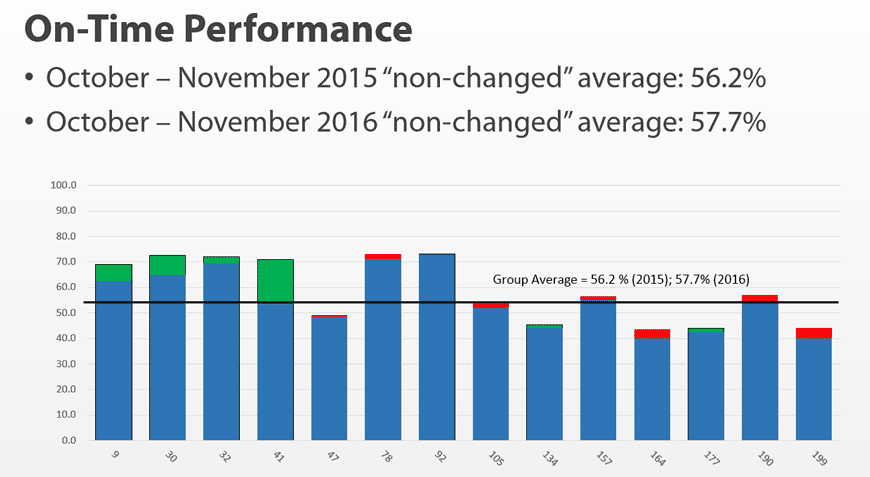 Some of our lowest-performing routes in terms of on-time performance continue to be the Express routes to Portland. That won’t come as a surprise to the freeway warriors who brave the commute every day. Traffic in the Portland-Vancouver region continues to get worse, and our buses are feeling it. Our drivers do the best they can to navigate difficult conditions every day, but sometimes those conditions simply don’t cooperate. Some routes, including the 164, hover as low as 40 percent on-time performance. Not good. Planned schedule adjustments on the Express routes this September will aim to better reflect travel times and offer more predictability. Stay tuned on those changes.

So what about ridership? Overall, C-TRAN’s numbers have been dipping in recent years, following the trend of other transit agencies across the country. Our fixed-route ridership dropped by about 4 percent in 2016. Nationwide, other mid-sized cities saw a drop of about 5.7 percent in transit ridership.

But the routes we changed in 2016 actually edged in the other direction. Ridership on those routes increased by about 1 percent from 2016 to 2017. We consider that a good sign.

The goal of any change, big or small, is to improve service for the greatest number of people possible. That’s always a work in progress: Communities change, and transit has to change with it.