Maintenance Soundtrack: Oldies, Metal and Everything In Between

The first rule of playing music in C-TRAN’s Maintenance department: Whoever turns the radio on first gets to choose the music.

The second rule of playing music in Maintenance: Anything goes.

“I’m a musical train wreck,” says Andrew, a C-TRAN mechanic who has one of the more eclectic tastes in tunes you’ll find in the shop. He rattles off a broad list of genres you’ll hear in his work area from day to day: doo-wop, blues, country, pop, rap and oldies, among others. One day he might be feeling like some death metal. (Andrew says another colleague prefers the Swedish variety.)

On a recent afternoon, Andrew worked on replacing a king pin – a bus part that’s connected to the vehicle’s steering mechanism – while “Come and Get Your Love” by rock group Redbone played on the radio.

C-TRAN Maintenance Training Supervisor John Orsetti doesn’t usually play music his office. He doesn’t need to. When his door is open, he hears much of what pulses from the shop.

Classic rock is what he hears the most, Orsetti says, along with country and a few other things. The space is large enough that you might hear two or three different kinds of music if you walk from one side of the building to the other. As long as it’s kept to a “low roar” – loud, but not so loud that it disrupts anyone’s work or becomes a safety issue – there are few restrictions on what plays.

And Orsetti? He’s a self-described “rock guy.” But he draws the line for one particular decade. 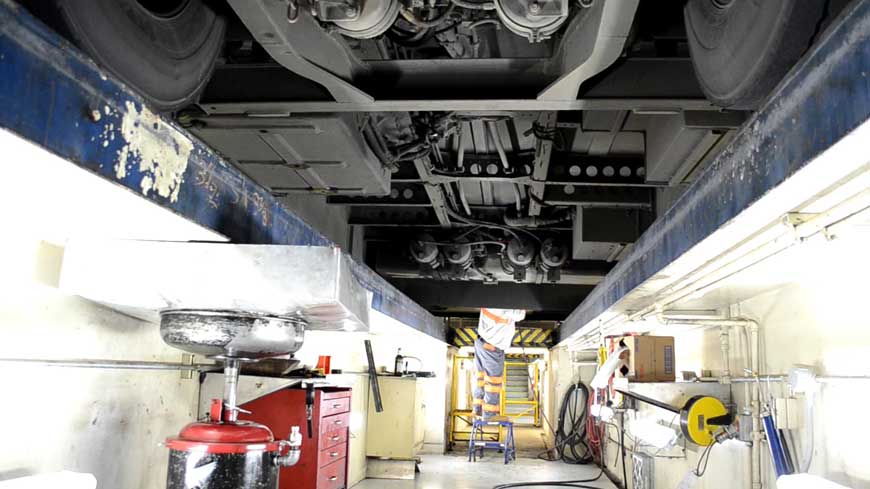 In another part of the shop, mechanic Jerry says he prefers older music from the ‘70s and ‘80s. He’s not a fan of heavier acid rock, or, as he puts it, “stuff that sounds like a cap beating on a trailer.”

These days, most workers play music through their phones on one of the shop radios. In the body shop, coach technician Mikey often plays the traditional radio, tuned to 101.9 KINK-FM.

Everyone has their own opinions, but there’s little discord or disagreement about what’s playing at any given time, mechanic Andrew says. People respect each other’s tastes. Though Andrew admits a few heads turn when he puts on Ariana Grande or the Backstreet Boys.

Andrew normally works the overnight graveyard shift. He equates the effect of music to the effect of sunlight – it improves your mood and morale. It keeps your energy up while the rest of the world is sleeping, he says. It’s why he subscribed to a premium music streaming service, because no one wants to listen to commercials.