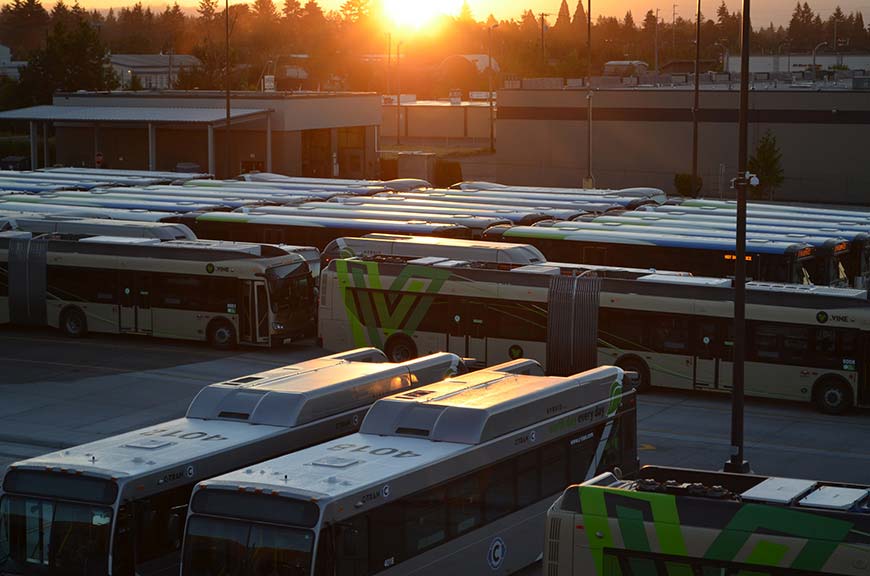 In 2008, C-TRAN added its first hybrid buses to its fleet. Today, hybrids account for more than half of the fixed-route vehicles we have in service.

And tomorrow? C-TRAN’s next big move on sustainability may be inside the tank: We’re now testing renewable diesel as an alternative fuel source. We started testing renewable diesel in a limited number of in-service vehicles last summer, evaluating a series of detailed metrics and overall performance to see how it stacks up against traditional diesel fuel – and to make sure it’s a sound investment for C-TRAN. We also want to make sure it achieves the sustainability goals we value as a transit agency.

So far, the results look promising. The maintenance cost per mile and fuel cost per mile have both dropped on the vehicles using renewable diesel since they made the switch. And renewable diesel is much cleaner burning, creating far less emissions, Shellenberger says. As a result, it’s much easier on the exhaust after-treatment systems that are installed on our buses. That ultimately lowers the time and cost required to maintain them.

Renewable diesel is made entirely from animal fats and vegetable oils. C-TRAN is currently testing buses using a blend called R50, which is about half renewable diesel and half traditional ultra-low-sulfur diesel – what we use on the rest of the fleet. R99, by comparison, is essentially all renewable diesel. (“If you look at the R99, it looks like water,” Shellenberger says.)

C-TRAN purchases R50 renewable diesel through a shared contract with Clark Public Utilities. It’s supplied by Carson Energy. We will be proposing to expand our renewable diesel test to include our entire fleet with R99 starting next year. After a two-year pilot, C-TRAN would then make an informed decision on whether to stay with renewable diesel or pursue a different direction, Shellenberger says. The two-year pilot would first be approved by the C-TRAN Board of Directors.

“We have to do our due diligence,” he says, “not only to transition to an alternative fuel vehicle for new bus procurements, but what about our existing fleet?”

That’s one of the major benefits of renewable diesel compared to other alternative fuel options: It’s interchangeable with traditional diesel and doesn’t require any new infrastructure or special vehicle types. It can be used with C-TRAN’s existing fleet.

“What’s the cost to transition? Nothing,” Shellenberger says. “Just drop it in, and away you go.”

What about the cost of the fuel itself? The price per gallon of renewable diesel is higher than traditional diesel. That’s no small consideration for an agency like C-TRAN that uses more than 1 million gallons of fuel per year. But the cost savings on maintenance and engine performance could make up some of that difference. And C-TRAN’s carbon emissions could be lowered as much as two-thirds by going to all renewable diesel, Shellenberger says.

Renewable diesel is only one piece of the sustainability puzzle as transit agencies across the nation look to move away from fossil fuels. C-TRAN will also introduce the first all-electric buses into our fleet in the coming years. Other transit systems have explored compressed natural gas or even hydrogen-powered vehicles.

Ultimately, Shellenberger says, “the goal is to become zero-dependent on fossil fuels while decreasing our carbon footprint.”

Friday, March 05, 2021
Transit employees don’t have an easy job. They just make it look that way. On March 18, we’re joining in national Transit Employee Appreciation Day to celebrate everyone involved in this essential...

Friday, February 19, 2021
Winter is mostly behind us, but not before the season brought Clark County its biggest snowstorm in years. C-TRAN kept running through it all, as we do year-round. Below are some of our favorite...