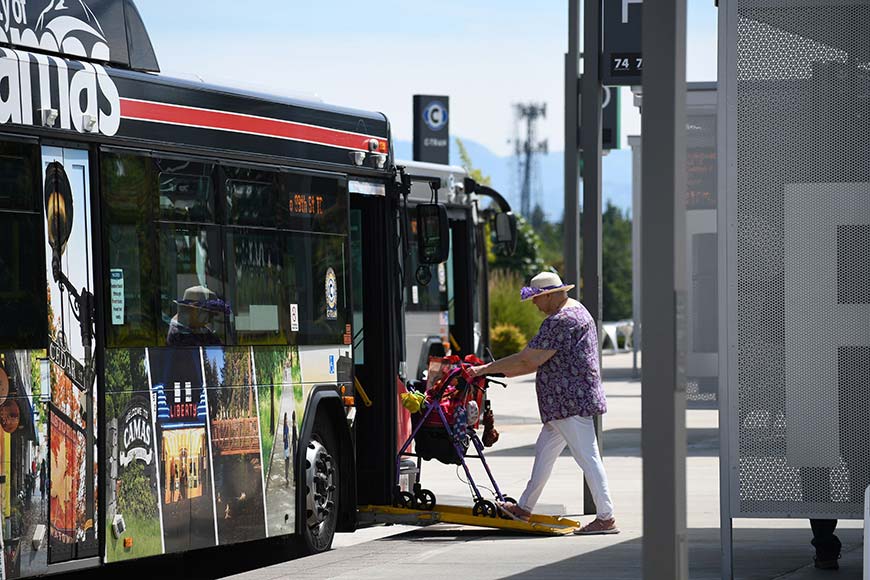 It’s been 30 years since the Americans with Disabilities Act became law. Change happened quickly in some ways.

Beth Cox, C-TRAN’s Manager of Customer Service, worked as a Customer Service representative at the time. She frequently interacted with C-TRAN riders during the early days of the ADA.

“I remember a lot of excitement from it,” Cox says. “And a lot of people excited to go out and have some independence.”

The ADA, signed into law on July 26, 1990, is a sweeping civil rights law that “prohibits discrimination and guarantees that people with disabilities have the same opportunities as everyone else in the mainstream of American life,” according to the law’s introduction.

Among other areas, the ADA has had a profound impact on public infrastructure and public transportation. For C-TRAN, it meant changing a lot of the ways we operated transit in Clark County.

By January 1991, C-TRAN began offering more accessible bus service with new lift-equipped buses. We established a new advisory committee with members of the public, one of the precursors to today’s C-TRAN Citizens Advisory Committee.

C-VAN, which operated before the ADA became law, expanded under the new guidelines. In 1999, C-TRAN brought its C-VAN paratransit service fully in-house to be operated only by C-TRAN staff. It has remained that way since.

One of the ADA’s requirements is that sidewalks and bus stops be accessible to anyone. All new infrastructure built since 1990 meets that requirement. C-TRAN has also updated hundreds of older bus stops to meet current ADA standards. But with nearly 1,000 total stops in our system, that was never going to happen overnight. C-TRAN continues to prioritize and update bus stops every year, Cox says, as do other transit agencies across the country. Making transit more accessible is an ongoing endeavor—as it should be.

Today, C-TRAN’s entire fleet is equipped with lifts for wheelchairs and mobility devices. C-VAN continues to be a lifeline for many riders with disabilities. And the ADA still guides many of the ways we operate as a public transportation provider. That includes public outreach, building and planning for future routes, for example, to ensure they are accessible to everyone.

Friday, December 04, 2020
When the COVID-19 pandemic and stay-home orders took hold last spring, one result was a dramatic drop in transit ridership across the country. C-TRAN experienced its own decline, though we fared...

Thursday, November 12, 2020
Adrian Cortes’ special education program at Camas High School covers lessons both inside and outside the classroom. One common theme of those lessons? Public transportation. Cortes helps...