C-TRAN 2030 is a long-range plan that helps chart the future of public transportation in the region. It includes future priorities for C-TRAN and future conditions as Clark County continues to grow. The C-TRAN Board of Directors adopted the plan in 2010, but a lot has changed since then. As the transit system adapts to new realities and needs, C-TRAN revisited the 2030 Plan with a partial update. After a series of public meetings, the Board officially adopted the revised plan on December 13, 2016.

Board of Directors Adopt C-TRAN 2030

With an 8-0 vote, the C-TRAN Board of Directors adopted C-TRAN's 20 Year Transit Development Plan at their regular meeting on June 8, 2010. The plan, C-TRAN 2030, will preserve existing service levels with improvements in the following areas:

"C-TRAN 2030 provides the framework on which to build public transportation for the future of Clark County", said Jeff Hamm, C-TRAN's Executive Director/CEO.  "We appreciate the Board's action in adopting C-TRAN 2030 and the many riders, citizens, neighborhood associations and community organizations that helped shape the plan into what it is today".

The adoption of C-TRAN 2030 culminates a multi-year planning process and extensive public outreach that considered several alternatives before arriving at a preferred plan that best meets the future transit needs of the next two decades.  Over the first ten years of C-TRAN 2030, it is assumed the agency would need to raise additional revenue equivalent to 0.3 (3/10) of one percent sales tax to fund the first phase of system improvements. In the coming months, the C-TRAN Board of Directors will consider several ballot measure scenarios and potentially identify a date for a public vote in late 2011.

C-TRAN’s 20-Year Transit Development Plan (TDP) - C-TRAN 2030, is looking into the future to determine the levels, placement and modes of transit services needed to meet the transportation demands of a growing community. Once adopted, this long-range plan will guide C-TRAN through capital facility and service design options over two decades.

A public involement process was initiated in July 2008 with a series of meetings aimed at informing local jurisdictions of the 20 year planning process and the agency's intent to begin significant public outreach to encourage citizen involvement. From there, C-TRAN staff spent several months presenting 20 year plan information and answering the questions and comments of over 450 citizens who telephoned, emailed, or attended a neighborhood association, service club or open house meeting held throughout the community.

During the public process, citizen and stakeholder feedback suggested the development of an additional service alternative that would incorporate the best attributes of the three previous alternatives, balancing productivity with coverage and adding High Capacity Transit. 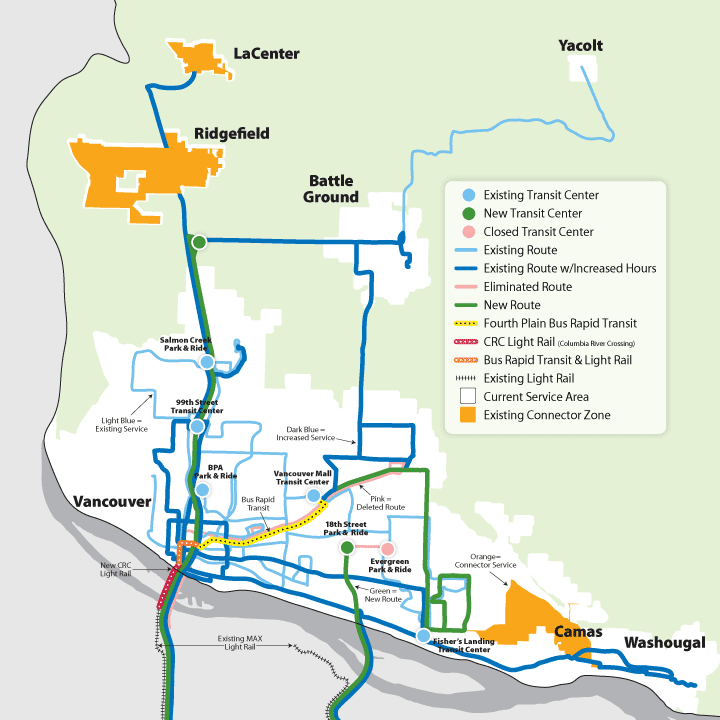 The development of an additional service alternative based on citizen and stakeholder feedback lead staff to recommend a preferred alternative that would add new service to areas of growth, more service in core areas, C-TRAN’s first bus rapid transit corridor and provisions for light rail in downtown Vancouver. At their July 2009 meeting, the C-TRAN Board of Directors authorized staff to take the preferred alternative – C-TRAN 2030 – out for a second round of public involvement.

From October 2009 through May 2010, C-TRAN Speaker’s Bureau presented C-TRAN 2030 to over 1,200 participants attending one of 55 public meetings with local associations, service clubs and chambers. An additional 19 information events welcomed over 300 visitors who received information on the preferred alternative, asked questions and made comments. Feedback on the plan was also collected by phone, email and through the C-TRAN web site.

Feedback received through this phase of public involvement confirmed an overall support for C-TRAN 2030. Participants acknowledged the potential growth of our region and the need to expand services especially for the aging population over the next 20 years. Most were concerned about funding and maintaining core bus service and how the Columbia River Crossing Project may or may not impact the plan. The public involvement process provided a meaningful dialogue about the regional benefits of transit – environmental, economic development, jobs & mobility.