Getting to Know The Vine's Buses (by name) 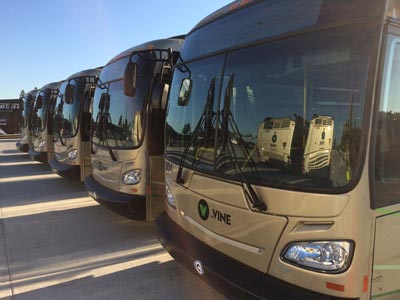 When The Vine started rolling in January, riders got their first taste of the 60-foot articulated buses that were introduced as part of the area’s first bus rapid transit system. Those 10 vehicles are unlike anything else in the C-TRAN fleet, and they take some getting used to if you’ve never been on one before.

C-TRAN trainers Larry Moore and Randy Millikan got to know The Vine’s buses as well as anyone while our drivers were training with them in 2016. Now, they practically know the buses by name. Actually, they named the buses themselves. We’ll let Moore and Millikan explain:

Bus No. 6001: “Millikan” – Named for the man who had the honor of driving the first articulated bus onto C-TRAN property in March 2016.

Bus No. 6002: “Eleanor” – The Vine buses’ champagne-colored exterior reminded Moore of the car named Eleanor in the movie “Gone in 60 Seconds”.

Bus No. 6004: “Early Bird” – The buses generally arrived in numerical order from manufacturer New Flyer, but not 6004. It arrived ahead of 6003, earning its name.

Bus No. 6003: “Show Time” – The reason 6003 was late? It was visiting other transit agencies in Washington who wanted to see the bus on its way to Vancouver. C-TRAN agreed to show it off.

Bus No. 6005: “J. Hamm” – Named for C-TRAN Executive Director/CEO Jeff Hamm. “We thought we’d better give him one,” Millikan says.

Bus No. 6008: “Night Train” – Moore again: “Because the bus will run past midnight, and it’s designed to run like a MAX train.”

Bus No. 6009: “The Rock” – The underside of a Vine bus looks much different than a 40-foot Gillig bus. It’s relatively smooth and solid, like a rock.

C-TRAN drivers spent much of last year getting a feel for the New Flyer vehicles as The Vine was preparing to launch. Even if they don’t call them by name, Moore says, drivers do notice small quirks that differ from one bus to the next.

One bus may have more sensitive brakes than the rest. The doors may behave differently on another. That’s to be expected, and drivers learn to adjust as they get to know the vehicles, Millikan says.

Almost without exception, drivers who get behind the wheel of an articulated bus for the first time comment on how long it is, Millikan says—60 feet is a lot of bus. Once they start driving, they also note how well it turns, he says. Because of the joint in the middle, The Vine’s 60-foot buses actually have a better turning radius than a regular 40-foot bus.

Moore, Millikan and other drivers care about the vehicles they drive every day, and it shows. Millikan likens C-TRAN buses to another kind of fleet under a watchful eye.

“I always compare the buses to like they did in the war, the flying fortresses. They go out on the deck, and watch them come back, and make sure they all made it,” Millikan says.