Snow in the Forecast? We'll be Ready

Winter hasn’t officially started yet, but when the first flakes appear in the forecast, C-TRAN will be ready. That’s because snow is serious business for this transit agency.

How serious? Preparations for this coming winter began all the way back in April. Months of planning go into C-TRAN’s Adverse Weather Plan – updated annually – which includes a complete snow and ice protocol for employees across all departments. This year, C-TRAN crews also installed signs to mark temporary snow stop locations near every station along The Vine. More on that in a bit.

When snow starts falling, it sets in motion a series of decisions that will determine what the day’s service looks like. That process starts well before the first buses roll out of the yard:

At 2 a.m., field supervisors, managers and others begin to fan out and check road conditions around Clark County. That includes known trouble spots and designated snow routes in the C-TRAN system. It also includes downtown Portland, where Express routes drop off commuters each weekday morning. As supervisors check road conditions, they keep in radio contact with C-TRAN dispatch to make sure the proper vehicles and equipment are assigned to the proper routes.

By 4:30 a.m., the Operations department has made the call on which routes will be on snow route to start the day. For Express service, it’s a question of whether buses can safely serve downtown Portland, or whether they’ll only go as far as MAX railheads at Delta Park and Parkrose transit centers. That’s a tricky decision to make – and sometimes an unpopular one – and it’s often based on the forecast for the rest of the day. To serve downtown Portland in the morning, we also have to be confident buses can make the return trip in the afternoon.

“We don’t want to get people to Portland and leave them stranded,” says C-TRAN Base Operations Manager Dan Gufrey. “We also don’t want to pull the trigger prematurely.”

Around 5 a.m., an Operations manager calls the on-duty communications contact with the morning report. That person begins sending out notifications to the public and to the media. Snow routes and other service impacts are posted to the C-TRAN website and relayed via email/text alerts, social media and other channels.

Once buses begin rolling, supervisors and drivers continue to monitor conditions on the ground and make changes as needed. Meanwhile, we continue to track the forecast and traffic from C-TRAN’s home base.

At 12 p.m., the morning crew gathers to debrief where things stand. That’s also the afternoon hand-off, when a new group assumes the same snow duties for the rest of the day and into the evening. 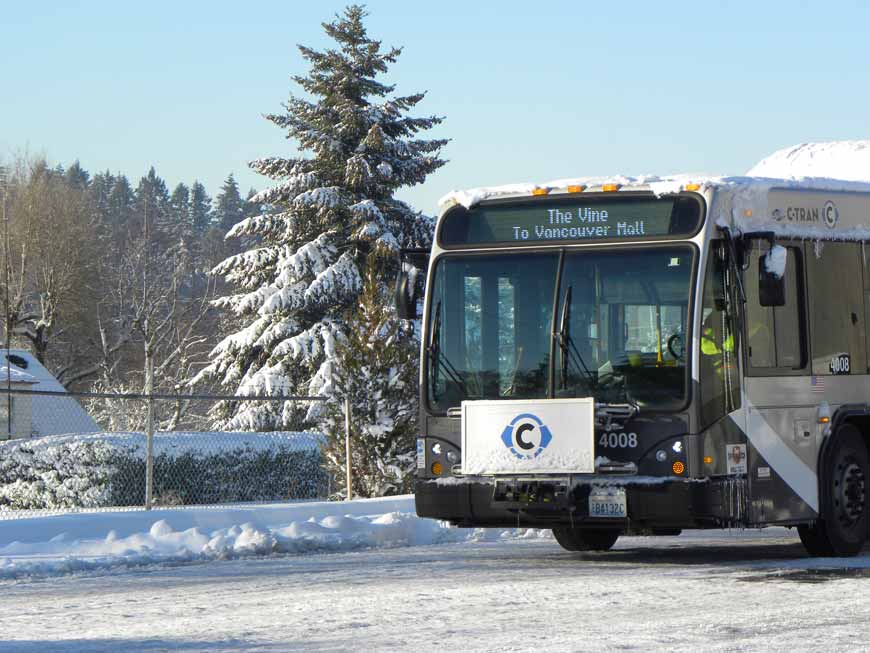 If snow remains in the forecast, the process will start again the next day. Even if the forecast turns out to be a bust, the morning crew has to be ready.

“The threat of adverse weather creates as much work as an actual snow event,” Gufrey says.

In January 2017, an unusually potent storm dumped about a foot of snow on most of Vancouver and Clark County. This also happened to be the first week of service for The Vine, the region’s first bus rapid transit system. Snow and ice piled up at Vine stations. Our 60-foot articulated buses were unable to get close enough to the platforms to safely serve them. That’s why 40-foot buses, equipped with automatic drop-down chains, ended up serving the sidewalk adjacent to those stations for much of the week. That’s also why signs now mark temporary stop locations next to each station should the platforms become unsafe this winter.

That storm was a once-in-a-decade kind of event, Gufrey says. But that’s a possibility C-TRAN has to be ready for. Many people don’t realize how much work goes into preparing for wintry weather, he says – whether it happens or not.

“By the end of the winter, we’re really glad that it’s over,” Gufrey says. “Even if it hasn’t snowed much, it feels like it has.”